An important goal for us is an ongoing dialogue with a younger audience. We introduce an inspiring repertoire to them, and having discussions not only about the music we perform, but also about the role of this music in their lives. Members of the Atar Trio are active in musical education throughout the year, and have offered many sessions for students in Israel, Europe and the US.. It is always a pleasure to respond to the natural curiosity and passion of young audiences.

Scroll down to read about some of our recent activities: 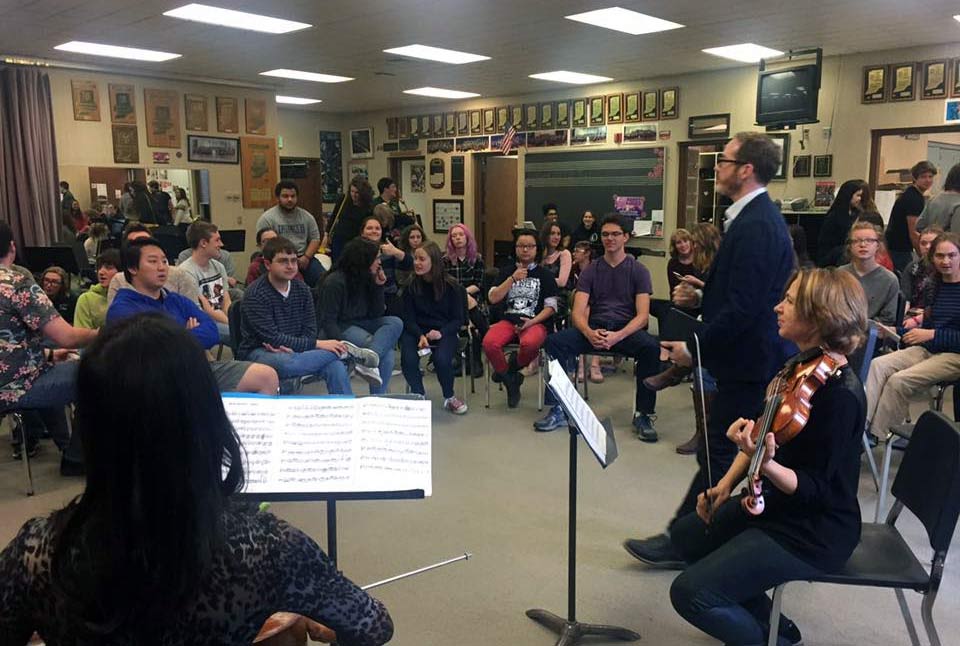 It was one of assemblies that bring a spiritual uplifting and optimism. We were honored to produce and take part in the Jerusalem music students conference under The Jerusalem municipality “Stage Project”. This welcomed enterprise brings together 100 students from various music schools from all over Jerusalem for a day of seminars, workshops and joint playing. For our guests from East Jerusalem, we have conducted the activities in Arabic, and all that witnessed, were happy to be part of the high energy.
The percussionist Oren Freid have taught the children about the Cuban rhythms, Guy Yaron improvised with them on the guitar, and Koby Shem Tov the composer has conducted a composing and dancing workshop. Ofer Shelley, the pianist and the producer of this special event, have worked with the students on a Cuban song. The conference concluded with the live concert “Cubana” by Atar Trio. I must say that the energy that the young audience have brought into the hall was intoxicating and sent “electric vibes” to each song and piece we’ve played. Not many times this happens with an audience!
May this conference be one of many to come. Special thanks to Avi Elbaz for the sound. Mrs. Zippi Elbaz from the Jerusalem Municipality, representatives of the Jerusalem Fund and the Music Education in the Ministry of Education have honored us in their presence. 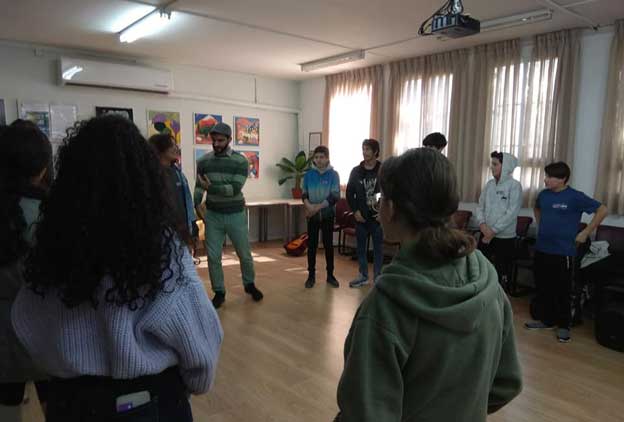 The annual choir convention of the Mediterranean Towers retirement communities was held in the past Hanukkah in Bat Yam. During the convention each choir preformed two songs with Shlomo Gronich, who took part in rehearsals and worked side by side with the conductors. The Jerusalem Choir, under the conductor Ofer Shelley, preformed “an old love song” arranged by Shelley, and “May it be all” one of Gronich’s renowned songs. Eric Sargon, a violinist who played with the Beatles, have joined the choir, as he does every week since he made Aliyah. The experience of music as a powerful uniting force have been a common thread in rehearsals and during the convention, and we were honored to be part of it. 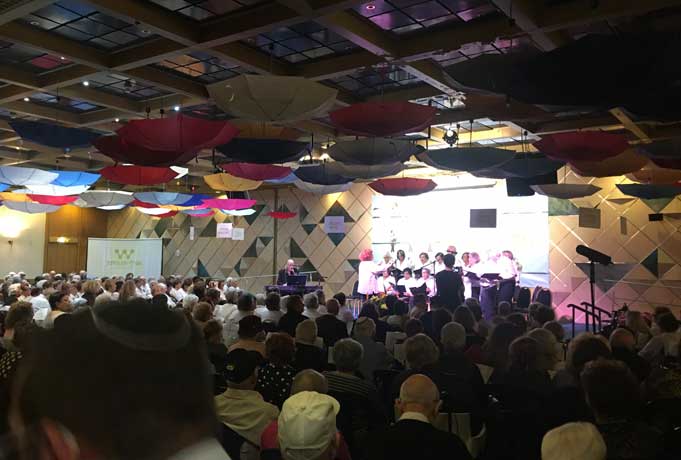 During our annual tour in the Netherlands, and the strengthening ties between the Audience and the Jewish communities, we were happy to conduct a morning musical activity for the students of the Maimonides Jewish High School in Amsterdam. At the heart of this stood our “Girl Butterfly Girl” program, a song cycle based on Tsippi Fleishcer’s music to the lyrics of surrealist poetry of Lebanese and Syrian poets and authors. We’ve discussed Jewish and Israeli music, talked about the behind the scenes of contemporary Israeli scoring and issues about performance and music delivery. We concluded the morning with a concert of our current repertoire and Israeli songs. It was a wonderful morning to talk and meet the Students of the Cultural program in the school. 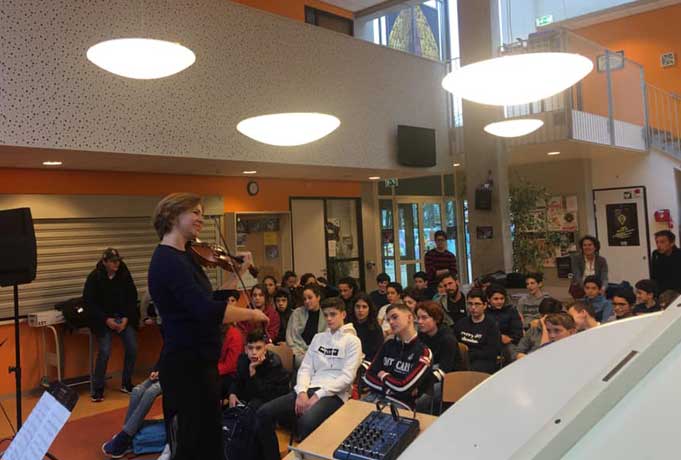 Part of our joint Israeli – French project we accommodated the Ensemble Des Equilibres for a series of concerts and master classes with contemporary and renowned composers: Benjamin Yusupov from Israel, and Philippe Hersant from France. We have conducted a special Master class with Philippe Hersant about his “Fantasies pour trio a cordes”, where the students met live contemporary music, and were intrigued by it. It was a unique opportunity to talk to the composer and ask him about his work and music. It was an interesting experience to all involved. Thank you Mr. Hersant.

The young strings instruments students from East Jerusalem were our guests for this special day of Master classes in the Magnificat. A joint ensemble of 6 French and Israeli musicians have conducted a joint chamber music performance and delivery, as well as technical classes. At the end of the day the students and their families were invited to a special concerts of the Ensemble Des Equilibres and Atar Trio. Thank you to all the participants and to the Magnificat Music School. 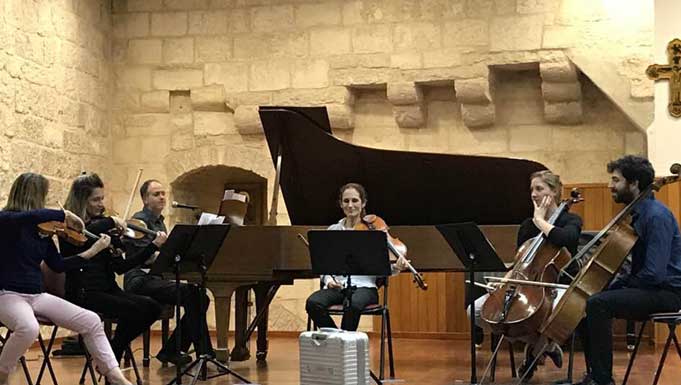 A joint Musical choir project – Young and Old sing together

At the Eve of Yom HaZikaron, The Israeli Memorial Day, we have conducted a joint musical project. In an Extraordinary venture young students joined the local choir of the retirement community in Jerusalem. Special scores and arrangements have been written to this project. One of the granddaughters of the residents accompanied us in guitar. We concluded the evening with a concert conducted by Ofer Shelley for Memorial Day. Thanks to Moran Cohen on producing the evening, and to the musicians Tania Beltser, Yivgeny Firlin and Alex Dimitry.

“Dream within a Dream” is an international project that took place in the USA and Israel, where we debuted two new pieces that were commissioned to Atar Trio: “Dream within a Dream” by the Israeli prodigy Talia Amar and the “Gregor’s Dream” by the acclaimed composer Judith Shatin .
We’ve met with the students of Columbia College in Chicago and presented a series of lectures about contemporary music and electronic soundtrack. We have also recorded a few pieces that were written for us by the students. The Cellist Tom Klein presented Eric Shapira’s music for a cello and electronic music, an intriguing conversation developed around and during these days. Thank you Ilya Levinson for producing this event, and keeping our relationship strong, and thanks for the Rockefeller fund for contributing for this as well. 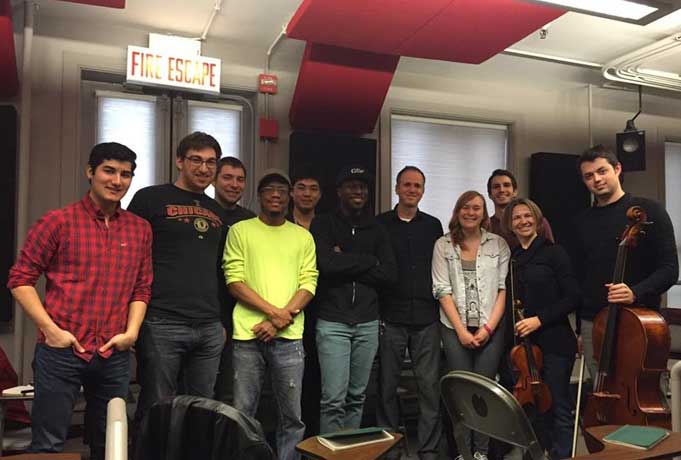 In the international project “From Mt Nebo” we combined contemporary music by Israeli and American composers in a 16 concerts series in the US and Israel. As guests of the Jewish community in Indiana, Atar Trio was invited to spend a day of master classes and a concert to hundreds of the students in Gary, hometown to Michael Jackson. The schools we visited has an amazing program that connects children from rough background to music. Together with the students we explored the world of improvising, and played them Israeli songs, and a special Michael Jackson song. It was a touching session. Thanks to the Jewish federation of Indiana and to the Chairman Mr. Michael Steinberg for producing this day.

Every once in a while we gather for a special students concert , where the young students play for their close community: their parents, brothers and sisters, family members and friends. The Atar Trio members teach in various establishments, and we are happy to bring our students together. In this concert we have invited our piano and violin students for a special concert – some played solo and some played together. We concluded the evening with a special concerts by us – this time the Argentinian composer Alberto Ginastera. Thanks to the HaSadna Conservatorium for hosting us. 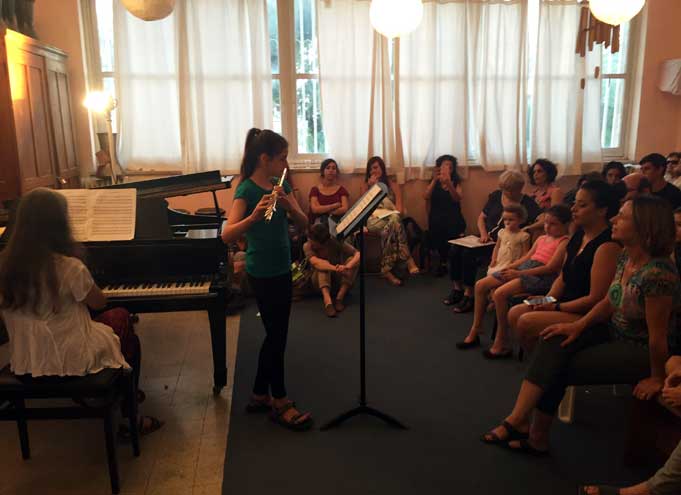 A group of leading chamber music teachers has gathered to establish a platform for music studies. This site offers a link for those who wish to study a musical instrument for both young student and adults, beginners or professionals. , Violin lessons , Cello lessons , Piano lessons in Jerusalem, Cahmber music groups in Jerusalem , Flute lessons and more.