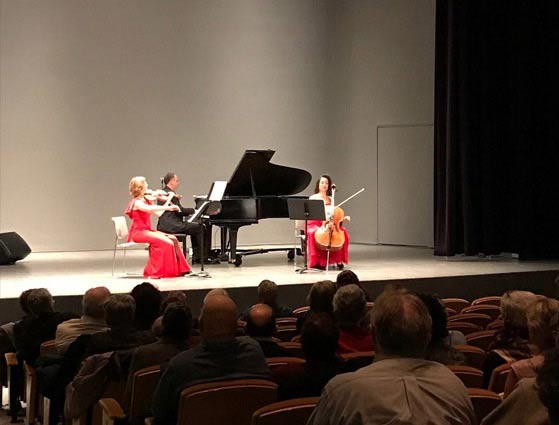 Pianist Ofer Shelley and violinist Tanya Beltser, graduates of the Rubin Academy, founded the Atar Piano Trio in Jerusalem in 1996. Later joined by cellist Marina Katz, they were guided by such luminaries as Prof. Binyamin Oren, Prof. Jerome Lowenthal as well as the Altenberg Trio in Vienna.


The Atar Trio performs a wide variety of music, and has created an unique voice through its original and adventurous musical projects. They explore new interpretations of Jewish, Israeli and world folk music as well as reviving historical pieces and delving into the traditional and contemporary chamber music repertoire. The Atar Trio presents dozens of concerts each season in Israel, Europe and the US, and has become one of the leading Israeli chamber ensembles. Their projects are supported by Israeli embassies and by the Rabinovich Foundation for the Arts. In addition to their performances on festivals and major chamber music series, they are regularly broadcast on TV and Radio. Recent tours have taken them to Italy, Austria, Hungary, the Czech Republic and Germany. The trio works with leading performers and composers, including such singers as Yeela Avital, Ofer Callaf, Ruth Levin. Performers: Eran Zur, Benny Hendel; and composers such as Michael Wolpe, Yitshak Yedid, Dikla Baniel, Arik Shapira and Judith Shatin.

The Atar Trio strives to reach a multi-cultural audience, educating and spreading the joy of a chamber music performance among an increasing circle. The ensemble is regularly invited to perform in chamber music series and festivals, to give master classes, and take part in music education programs. They have also performed at official Israeli national functions for organizations including Yad Vashem, the Hebrew University, the Ministry for Foreign Affairs, the Jewish Agency and ACUM, the Israeli organization for composers.

The thematic programs they offer include original projects, based on Ofer Shelley’s research and musical arrangements. Among them are "A light in Your Window", presenting a collection of classic Israeli folk songs in a new setting for a trio and a soprano; "Chamber Jazz", presenting Jazz and Blues in chamber music with contemporary musical materials by Maurice Ravel, Paul Schoenfield, as well as music composed for the program by Yitshak Yedid; "A Simple Story": a musical theater piece for chamber ensemble and actor, based on the story by S.Y. Agnon; "The Jewish Cabaret", exploring the Jewish chamber music and the Yiddish folklore Europe of the early 20th century with music by K.Weill, J.Achron, A.Schoenberg, Y.Manger and others. In addition, the Atar Trio offers "Silence the Muses!" for a moderator, trio and a digital sampler, composed for the trio by Arik Shapira on a text by Yoel Hofman. The latter is available on both CD and Video.